Our Resource Centre is a hub for all things leasing.

In a little over 12 months since Innervision’s relaunch of its Corporate social responsibility (CSR) programme, the company has accomplished many interesting, varied and some might say slightly quirky projects.

Initially there was a scatter gun approach with consultations and opinions sought from all, (who would listen!) before the soft re-launch in July last year.

Innervision is now a member of the following groups:  BBC Plastic Watch, #plasticfreecity, City of London Clean City Awards.  This led to the company taking a more active CSR role in its office stationery and rubbish disposal.

Also, it contributed to the first CSR customer and employee gift – the reusable WATERBOTTLE from which we have all benefited.

Further discussions last summer together with a CSR questionnaire flushed out the sort of activities favoured by the company’s employees. This led to Innervision not only joining groups such as Terracycle and WRAP (recycling), Time to Change (mental health), Feedback (food waste) but also exploring companies like Benefacto which helps organise employee CSR activities.

The culmination of the summer CSR projects was the Bee Hive sign off. Since then the hives have been transported to their new home and the bees have been hard at work buzzing around from flower to flower collecting pollen and nectar. 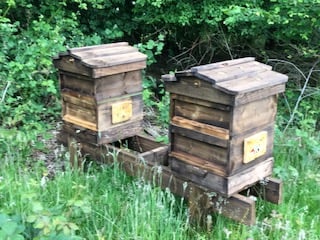 Autumn took a decidedly healthy turn with the company joining Business Healthy and Mind in support of World Mental Health Day, plus Help for Heroes.  Not forgetting those valiant members who chose to GoSober in aid of Macmillan or take a fitness class in the guildhall.  Well done all.

How could we forget the launch of Happiness Day with its fun messages every day – give your neighbour a big hug.  Thankfully, this was kept to the company only!

The year ended on a quieter note.  Now, we all know that December 18 is Innervision’s Annual Juicing Day.  Who could do without bamboo toothbrushes and fennel toothpaste as those lucky Christmas party goers found out with the special CSR gifts?  Finally, in a rush of blood to the head a couple of mad guys decided to sign up for the London Half Marathon in aid of Centrepoint.

The new year was kicked off by our very own Super-Eco-Man, who could forget that picture!  As a direct result of the summer questionnaire, our CSR Manager was able to solicit a very generous contribution from the company.  Each employee may enjoy 2 free CSR days to contribute to their chosen charity.  This also resolved the conundrum as to which charity should receive donations.

There is now a Social Calendar with planned events, featuring a bit of culture or exercise together with everyone’s favourite pastimes of eating and drinking.  St Paul’s, the Tower of London, pub crawls and pizza – you sort out which is which.

Finally, let us pay tribute to the half marathoners, Phil and Martin who raised nearly £3k for Centrepoint – congratulations! And here are a few pictures to celebrate Innervision’s CSR year.

Have You Met Lois?

see all
Want to know more?
There are lots of ways to get started.

Request a call back

Get in touch to gain greater insight into how effective lease management solutions can help transform your leasing.

Discover how our software, LOIS, can help transform your leasing. We’ll be able to show all the features and tailor the demo to meet your business requirements.

Contact us and speak to one of our leasing experts who will answer any questions you might have.