Our Resource Centre is a hub for all things leasing.

Back to Leasing Basics: Finance Lease vs Operating Lease

As it currently stands, leases are generally divided into two types. Although there are many variations and derivatives of a lease, they are usually described as either Finance Leases (also known as Capital Leases) or Operating Leases.

For more on lease accounting and to keep up with the latest updates ahead of the ASC 842 and IFRS 16 implementation date, click here.

One point to remember is that the two main international accounting boards (FASB for US and IASB for Europe) have slightly different criteria for determining lease types. These definitions are important for lease accounting, but for practical purposes, the interpretations are very similar.

A lease is defined as a finance/capital lease if it meets one or more of the following conditions:

*Asset economic life is dependent on asset type and the assessment of the lessee and their auditors. It is a subjective assessment, but based on market trends and experience. For example most IT is deemed to have a 5 year asset economic life whilst plant and machinery can be upwards of 10 years.

The main feature of an operating lease is that the risks and rewards associated to ownership remain with the lessor. The lessor invests a residual value (typically greater than 10%), making an operating lease cheaper over the primary lease term and leaving the lessor to make his profit from the secondary use of the equipment – either by extending the existing lease with the existing lessee, by re-leasing or re-marketing the asset elsewhere. If the asset is worth more than the residual value, the lessor makes a profit; if the asset is worth less, the lessor makes a loss – hence the risks and rewards rest with the lessor.

If the lessor knows that as the lease is approaching the end of the primary period, the fair market value of the asset is going to be less than the residual value (and they are going to make a loss), they will almost certainly change their behaviour and try and encourage/force the existing lessee to pay more money, either through lease extensions or penalty charges. This is the point at which most lessee issues and disputes occur and an area that needs careful planning and lease structuring.

Operating leases currently appear off balance sheet making them an appealing prospect for many companies. However, with the impending implementation of new leasing standards IFRS 16 and FASB ASC 842, this is set to change as lease accounting is set to become more transparent. 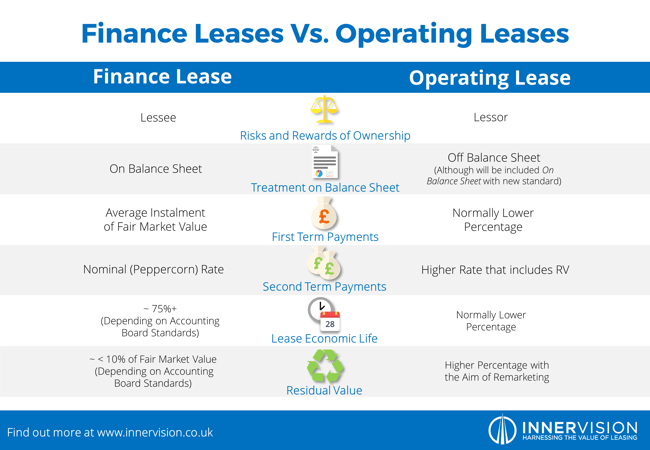 These guidelines have a fairly general ideal for categorising leases and, with the exception of the figures stated by FASB, are open to lessee and lessor combined interpretation. There is room for negotiation and each lease agreement is often treated as a separate and specific case, so some agreements may be called a finance lease in one case, but include some of the features of an operating lease and vice versa. There are, however, some key differences between the two leases that rarely change.

The concern is that the existing accounting treatment is inconsistent and provides an unclear representation of a lessee’s liabilities, as operating leases do not have to appear on balance sheet. This has led to examples of entities playing on the subjective nature of these operating lease and finance lease descriptions, altering their lease agreements so that they will qualify as an operating lease and therefore be omitted from the balance sheet. Plus, financial statement users are concerned about the current lack in transparency and comparability of lease commitments under the existing lease accounting standards.

In order to combat this, the IFRS Foundation and FASB have spent the majority of the last decade developing a new lease accounting standard that would include all leases, regardless of lease type, to be accounted for on a lessee’s balance sheet. Although there will be some exceptions - for example, leases under 12 months will not have to appear on the balance sheet - this change to accounting regulations is set to have a dramatic effect on leasing and the way companies arrange their future agreements.

Under IASB's IFRS 16 accounting treatment, all leases will recognise the right of use asset and lease liability on a straight line basis. This effectively negates the operating lease vs. finance lease assessment as IFRS 16 lease accounting definition of a lease focuses less on the risk and rewards and more so on which party has the right to control the asset.

Although there is still some time until the new leasing standards effective date, gathering the necessary data required and organising your leasing portfolio takes time and lessees need to start thinking about beginning the data mining and analysis of their current lease portfolios. This process can be made much quicker, more efficient and simple through bespoke, specialised lease management Software as a Service (SaaS) and expertise. It is vital in these early stages that a lessee know how many operating leases they have and how the new accounting treatments will impact them.

For more information on the IFRS new lease accounting standard and how your organisation can prepare with Innervision’s lease management software, LOIS (Lease Organisation and Information Software) contact our leasing experts on +44 (0) 20 7283 9422.

This is an edited extract from our Ultimate Guide to Leasing Basics. To download the full e-book, click here. 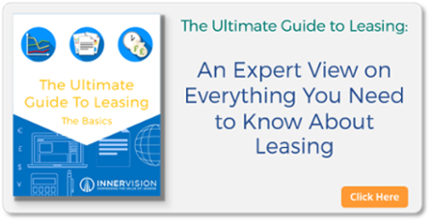 For more on lease accounting and to keep up with the latest updates ahead of the ASC 842 and IFRS 16 implementation date, click here.

Have You Met Lois?

see all
Want to know more?
There are lots of ways to get started.

Request a call back

Get in touch to gain greater insight into how effective lease management solutions can help transform your leasing.

Discover how our software, LOIS, can help transform your leasing. We’ll be able to show all the features and tailor the demo to meet your business requirements.

Contact us and speak to one of our leasing experts who will answer any questions you might have.